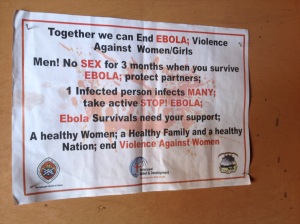 It’s an important issue, so I’m going to write about it.

First some context. To say that Liberia’s gender equality movement has a long way to go is a profound understatement. Liberia is among the lowest countries on the United Nations’ Gender Inequality Index, competing with Afghanistan and the Democratic Republic of Congo (both considered active war zones) for who holds the largest gap between male and female opportunity.

Liberia has been free from civil war for little more than a decade. In any conflict, women’s bodies become part of the spoils, but Liberia’s violence displayed particularly gendered brutality. Reports of nauseating sexual assault – widespread gang rape, sons forced to rape their mothers at gunpoint, genital mutilation, etc – abound. The numbers are blurry, showing anywhere from 15-75% of Liberian women to be victims of war rape, but the conclusion is clear. Extreme violence against women was endemic.

Significant progress has been made since the end of the war. The election of Ellen Johnson Sirleaf (the first female President in the continent), the passage of new rape legislation, and the growth of community support networks are all testaments to a safer future for women in Liberia.

But the idea that women are mens’ property remains widespread and deeply rooted. Sande bush schools – secret, informal academies of housewiving that culminate in genital cutting rituals – continue to pull girls from primary and secondary school despite government efforts to shut them down. These “schools” indoctrinate girls as young as three years old on female subservience, and contribute to a pervasive culture of gender-based oppression. As one member of our psychosocial team explained, many women “don’t believe their husbands love them if they’re not being beaten.”

Unfortunately, cultural context means very little to an Ebola viron. For up to three months after an individual eliminates Ebola from the blood stream, discrete traces of live virus linger in the person’s breast milk or semen. So when we discharge survivors from the ETU, the psychosocial team gives them the talk. For females, no breast feeding. For males, abstinence or condom-covered sex.

(Note: while the Ebola virus has been cultured from the semen of survivors within that three month window, there is no reported case of contracting the disease from only sex. At least not yet. Previous outbreaks have been too small, with too few male survivors to find a case of survivor-to-partner transmission via semen. And this outbreak has so far been too big to trace exactly how a patient contracts the disease.)

Asking a survivor to help prevent Ebola’s spread by practicing safe sex may seem like a reasonable request, but the conversation is a melee of scientific evidence and cultural norms. Not all, but many men scoff at the idea of abstinence or using protection, especially if they’re married. If they don’t voice their opposition, their silence tells all.

“You could see his eyes glaze over,” said one psychosocial officer after an exit interview, “he was no longer listening.” The survivor left the ETU with a discharge kit carrying as many condoms as our stock allowed, but whether those rubbers were used, thrown or sold was ultimately up to him.

This reality has women in Liberia worried. They know they have little power over men in the home, and even less in the bedroom. If a woman’s husband survives Ebola, leaves the ETU, returns home and wants to engage in unprotected sex, there’s little she can do aside from pray. One national nurse is so concerned she has called for legislation to put male survivors into three months of forced isolation – Ebola prison. Once they’ve done their time, they can force their wives to have all the unprotected sex they want, at least they wont pass on the virus.

The science behind how this virus spreads bares a tough truth: if we are serious about ending Ebola, we must address gender inequality in the affected countries. That’s so much easier said than done, but it must be done, for it will decide whether Ebola stays an emergency or becomes endemic.

Until women in West Africa are safe from men, with each new male survivor, a new three-month countdown begins.

“A House with Two Rooms: Final Report of the Truth and Reconciliation Commission of Liberia Diaspora Project.” 2009. The Advocates for Human Rights.
http://www.theadvocatesforhumanrights.org/Final_Report.html